About Us – Nu Metro

Beginning in February 1902, Nu Metro started as South Africa’s first cinema exhibitor. 120 years later, there are currently over 25 Nu Metro cineplexes with 179 cinemas spread across cities in Southern Africa, including:

Most cinemas are not able to provide the full viewing experience that the film director envisioned when making the movie. Nu Metro has changed all that.

Nu Metro Xtreme can simply be summed up as “Big Screens, Big Sound, Best Digital Quality” – now available at 8 Nu Metro cineplexes nationwide. It is one of Nu Metroʼs top-tier cinema brands – along with our multi-sensory 4DX- and luxurious VIP-theatres. Xtreme theatres at Nu Metro are the most technologically advanced cinemas in South Africa.

Some Xtreme screens are over 3 storeys-high – with curved, silver cinema screens in select Xtreme cinemas. New Xtreme installations boast Barco phosphoric laser projectors - delivering 4K Ultra HD visuals with a colour spectrum of around 70 trillion colours. Laser projection literally makes the movies come to life – this is the future of how movies are being projected already now.

Dolby Atmos sound reproduces the most realistic cinema audio, with over 52 “channels” of sound, played through a wide array of speaker outlets placed strategically throughout the Xtreme cinema (including overhead) - moving beyond the confines of “stereo” or “surround” sound. Dolby Atmos delivers powerful all-around sound; sound objects can literally be moved around in 3D space 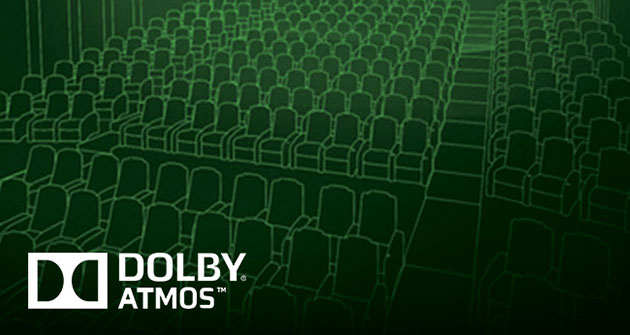 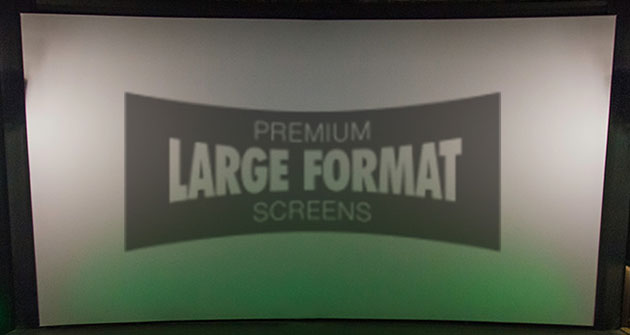 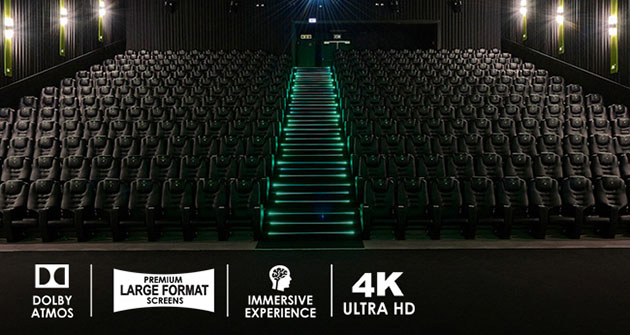 Dinner-and-a-movie has never been easier. For a classy date night, gathering of friends or a stylish escape from reality, Nu Metro VIP cinemas are the “first class” choice for the most discerning moviegoer.

Enjoy an impressive selection of sumptuous meals from our a la carte menu, designed by our acclaimed Executive Chef and freshly prepared in our cineplex kitchen on the premises, while you watch your movie in the comfort and luxury of fully reclining leather seats.

Weʼve just refreshed our menu to enhance your in-cinema restaurant experience in our luxurious VIP cinemas (select cineplexes). Our new range of food baskets offers a variety of yummy snacks, including tempura seafood delights and vegetarian delicacies; with new additions to our wine list as well as a selection of premium liquor brands.

A fully-licensed bar and lounge area at select VIP cineplexes cater to all tastes, serving a wide variety of skilfully prepared hot and cold beverages.

Nu Metro VIP offers moviegoers the ultimate extravagant experience, and a chance to be treated to luxury. 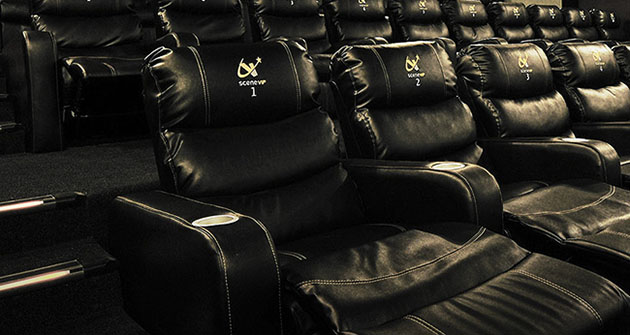 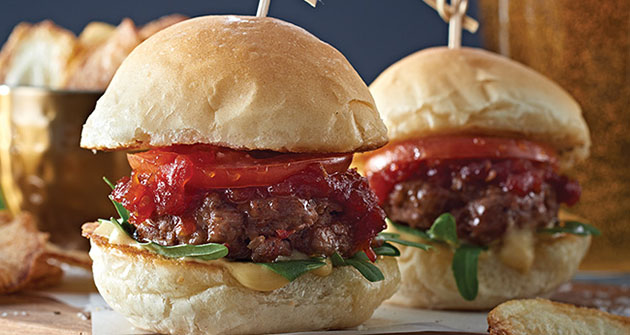 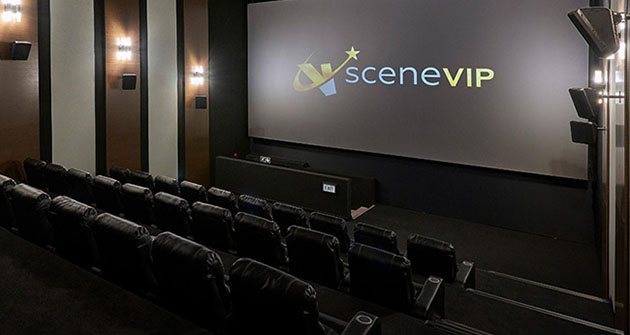 Multi-Sensory Cinema (OR Feel It In 4DX)

4DX is our most innovative cinema experience available, exclusive to select Nu Metro cineplexes in South Africa. We have already expanded to 6 of these multi-sensory cinemas across the country… and thatʼs only the beginning

Nu Metroʼs one-of-a-kind 4DX cinemas take moviegoers on a cinematic journey like nothing theyʼve seen, felt or heard before, making them a part of the onscreen action like no other cinema can. 4DX is a premium, multi-sensory cinema experience, exclusive to Nu Metro.

Signature 4DX effects in-cinema also include rumbling, shaking and floating seat movements. These movement simulations are tailor-made for scenes where objects are floating or flying through the air. 4DX brings viewers as close as virtually possible to the movie action within the comfort of an advanced movie theatre.

4DXʼs high-tech motion seats use Servo motoring systems, not hydraulics, connected to an intricate network of computers throughout the cinema – placing 4DX cinema technology head-and-shoulders above theme-park simulators and other similar formats. The difference is also that full feature films are being coded by the worldʼs top film studios for the 4DX format – which has grown rapidly in reputation and acclaim amongst Hollywood producers as a 21st-Century cinema format to reckon with.

The environmental effects are synced perfectly with the action on-screen through coding collaborations between 4DX engineers and filmmakers - to create the most exhilarating, unmatched cinema outing, only at Nu Metro in South Africa

Movies are now no longer bound by their visual and aural limits. 4DX is the next step in the movie-going evolution, taking audiences on a journey into the full feature film.

4DX is a fun, action-packed, multi-sensory cinema experience like no other! Please take note of the 4DX safety guidelines. 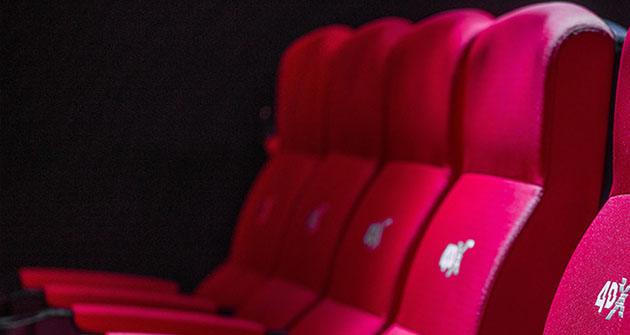 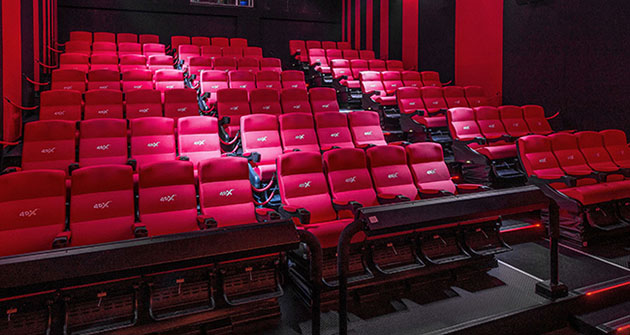 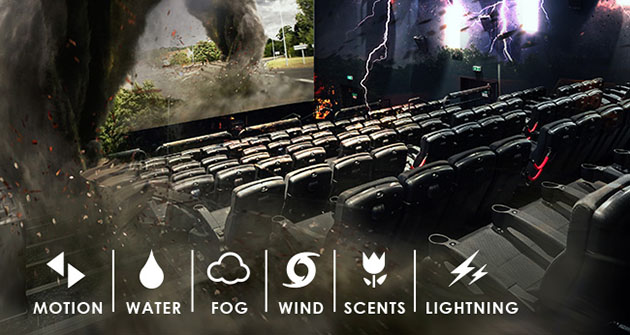 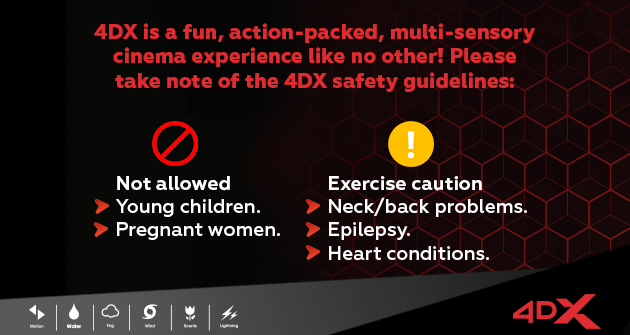 Along with our commitment to delivering all major local and international movie entertainment, Nu Metro also strives to screen alternative/specialist content such as live music, comedy, and theatre shows on the big screen.

Its own content is also acquired independently, for exclusive distribution via its nationwide chain of cineplexes. These include events featuring live comedy and specialised content premières. 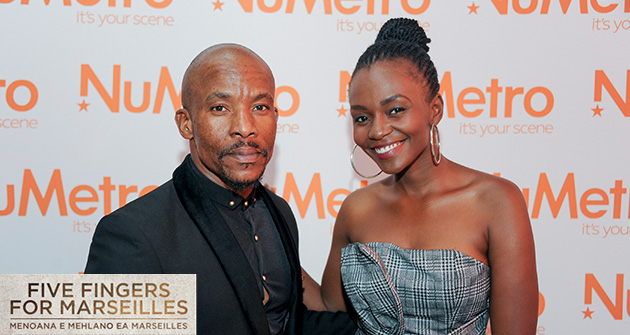 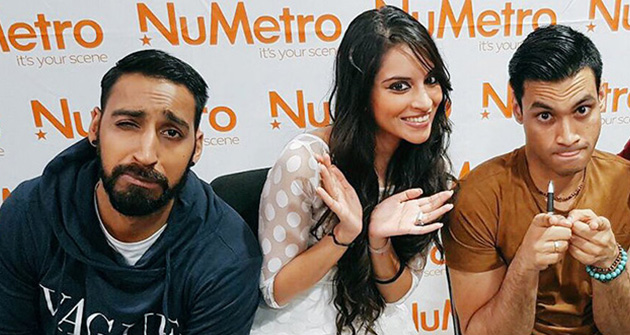 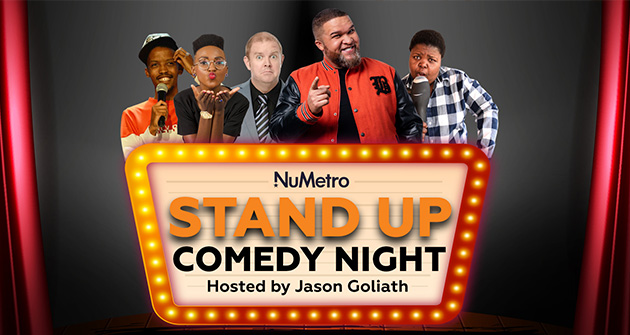 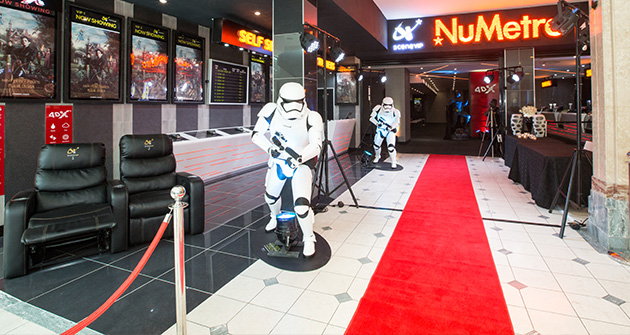 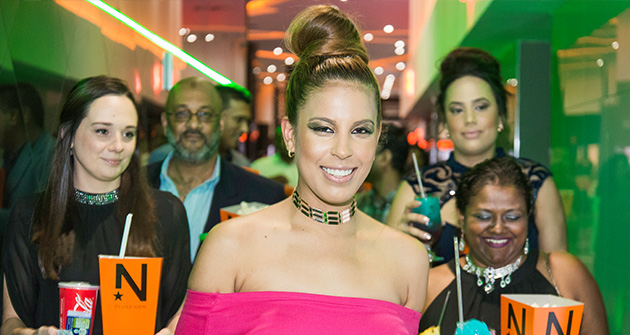 Absa, one of the largest banks in South Africa, offers a range of retail, business, corporate and investment banking through wealth-management products and services throughout South Africa and Africa.

Absa Rewards is a revolutionary loyalty programme that rewards members whenever they use their Absa Debit, Cheque or Credit cards with discounts on partner products and services and monthly cash-back rewards.

At Nu Metro, customers benefit from a 50% discount on movie tickets.

Momentum provides financial wellness products and services in South Africa. Multiply, Momentumʼs wellness and rewards programme, aims to encourage members to reach various goals by rewarding their progress each step of the way. Multiply members receive rewards in the form of discounts on Momentum products, as well as with a variety of partners.

The Nu Metro benefit is offered as a lifestyle reward, with movie ticket discounts offered to Multiply members based on a tier system.

Love the big screen? Sanlam Reality members enjoy up to 65% off their movie experience (refreshments included)!

Nedbank has positioned itself in the market as money experts who do good, see money differently and challenge customers to do the same. Nedbank wants to enable customers to live their lives without the hassle of money being their stumbling block. 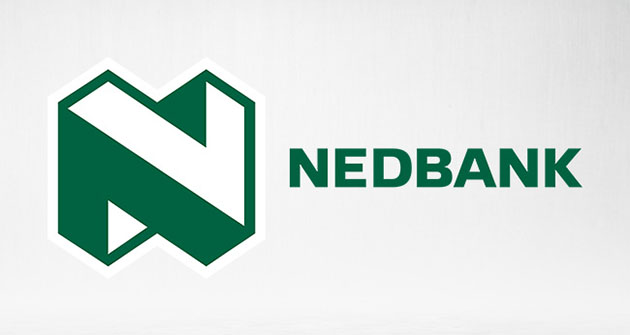 Nu Metro is extremely passionate about engaging with the surrounding local communities and providing support to those in need. Our employees regularly attend local events which promote the communities in which we all collectively participate.We are proud of our commitment to support the community and are delighted to contribute towards a variety of worthwhile causes.

Nu Metroʼs vision for maintaining a sustainable and responsible environmental footprint is to be considered one of our most important endeavours. Throughout the years, we have begun to implement a number of initiatives towards manufacturing our materials from sustainable or recycled resources.

Nu Metro is passionate about and committed to providing adequate facilities to all moviegoers who visit our cineplexes. A large part of this includes making facilities available that are accessible to individuals with disabilities, such as our wheelchair-friendly cinemas. We also proudly train our staff to assist guests with disabilities when needed, ensuring that everyone will enjoy their ultimate movie experience with us.
Nu Metro strives to create an all-inclusive vibrant culture in which to celebrate diversity. Each of our employees form an essential part of the Nu Metro family and together we make every effort to place growth and development at the centre of our focus. We celebrate our diverse workforce and our foundation is built on our code of conduct that clearly stipulates a zero tolerance towards any acts of discrimination based on race, gender, nationality, disability, religion or age.

The Nu Metro workforce is filled with unique individuals possessing the essential attitude needed to create a high performing culture based on our 8 guiding principles:

Nu Metro values the creation of context to ensure a common ground for all employees to buy into. Our success is based on our commitment to collaborate within and between all teams. We are fast to act and adapt as the market changes to ensure that we meet customer expectations. Through our open communication we debate, agree and disagree until we all commit to one solution.

We firmly believe in the concept of Sisonke (Us Together), which is also the name of our internal Workplace Forum. These Sisonke representatives are elected by employees and play a vital role in improving the communication between the management team and employees at each site. We celebrate our employees on a variety of matters, ranging from their excellent service delivery to their birthdays.

“Us Together” – Sisonke! Team work makes the dream work.

Great thought is always given when considering the way our offerings and brand are presented to the community. We make sure to exclude deceptive, irresponsible, unethical, unlawful or damaging content. It is important that our content is conveyed to customers in a manner that suits their language, age and social needs.

Particular care is given in the case of marketing to children, and we are dedicated to fair and moral marketing practices. By carrying out our promises and supporting every message we convey, we have established confidence with our customers. When training our employees in marketing, we ensure that a variety of issues are covered. These include moral and trustworthy conduct in advertising, product marketing and sales promotion.

The matter of customer privacy is of the highest importance to Nu Metro, and we take every precaution to closely safeguard this privacy and the information of our customers. We make sure to uphold all of the regulations, rules, laws, and internal procedures associated with privacy. Information security on our customer databases is carefully maintained and the sharing of customer information with outside parties is strictly forbidden.